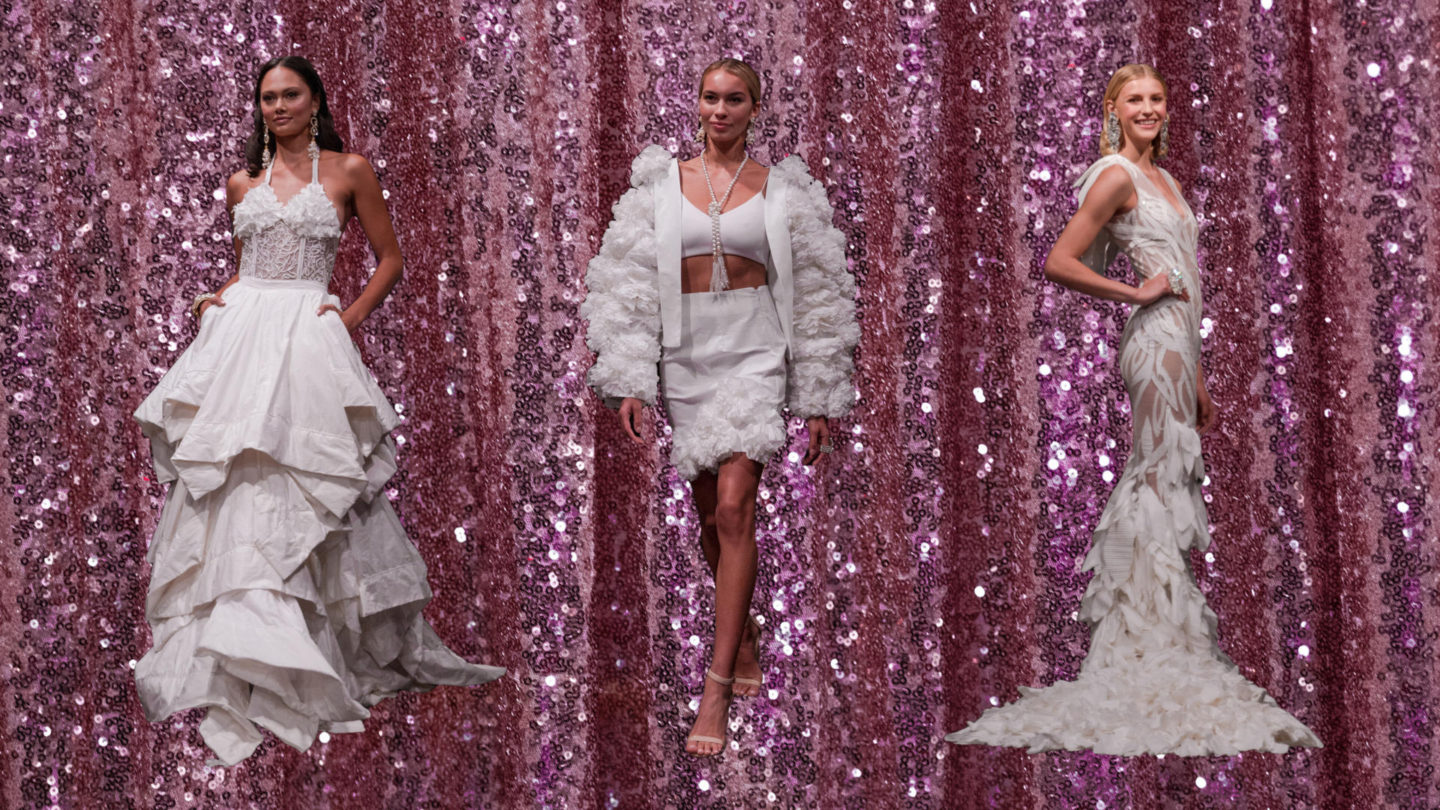 I always really enjoy Cashmere Collection’s fashion events since not only each year it showcases beautiful designs, but also supports a great cause and help women fight breast cancer. A glittering vision of a future without breast cancer was revealed yesterday at the 15th annual Cashmere Collection in Toronto. To celebrate the collection’s milestone anniversary supporting Canadian fashion and raising awareness-and-funds for the breast cancer cause, this year’s event was themed The Crystal Ball, symbolizing the traditional 15-year anniversary gift, and the eternal love and unwavering commitment crystal represents. The runway show presented 15 Bathroom Tissue Couture creations (each one was embellished with 4,000 crystals!) from 15 incredibly talented, all-new designers.✨ 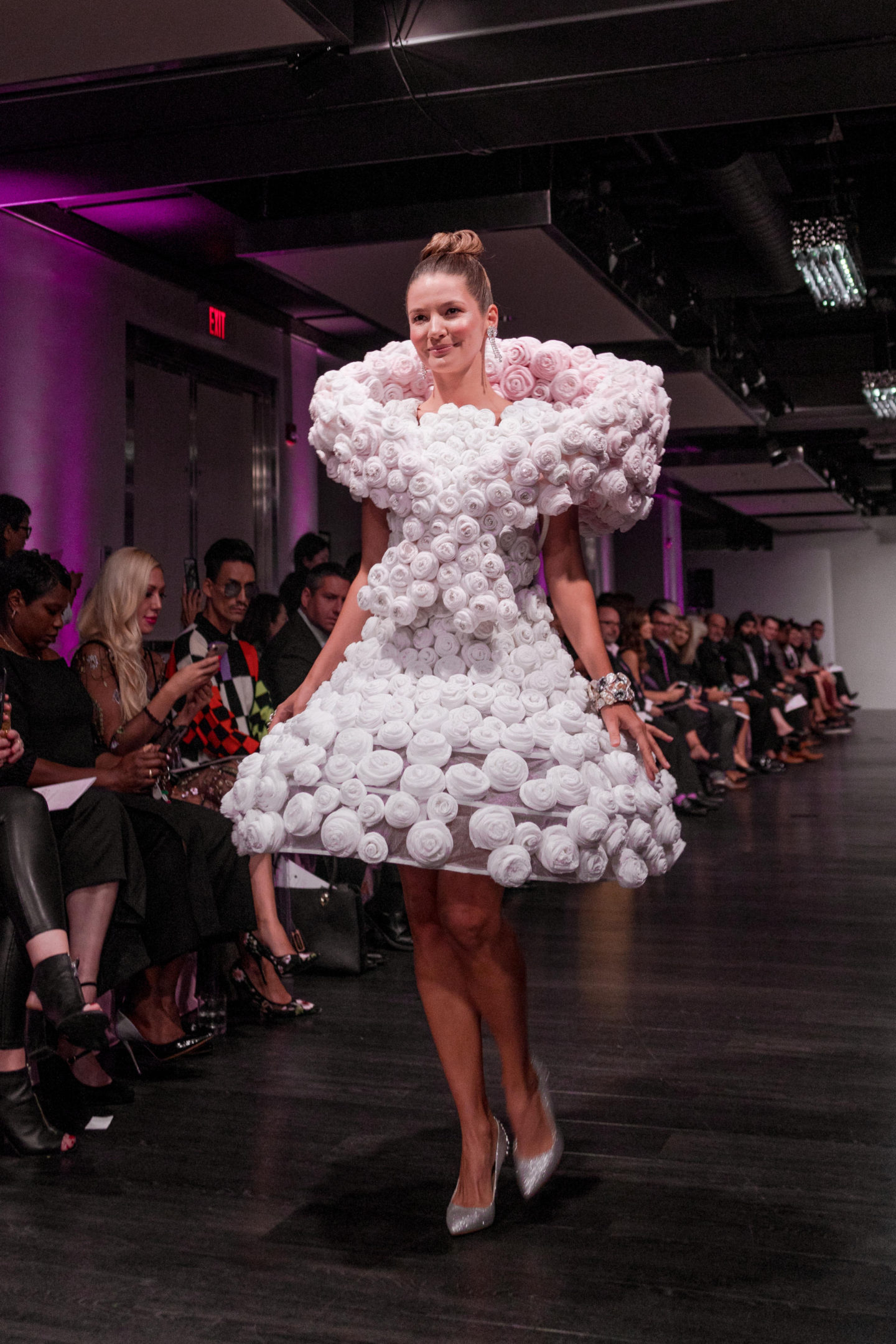 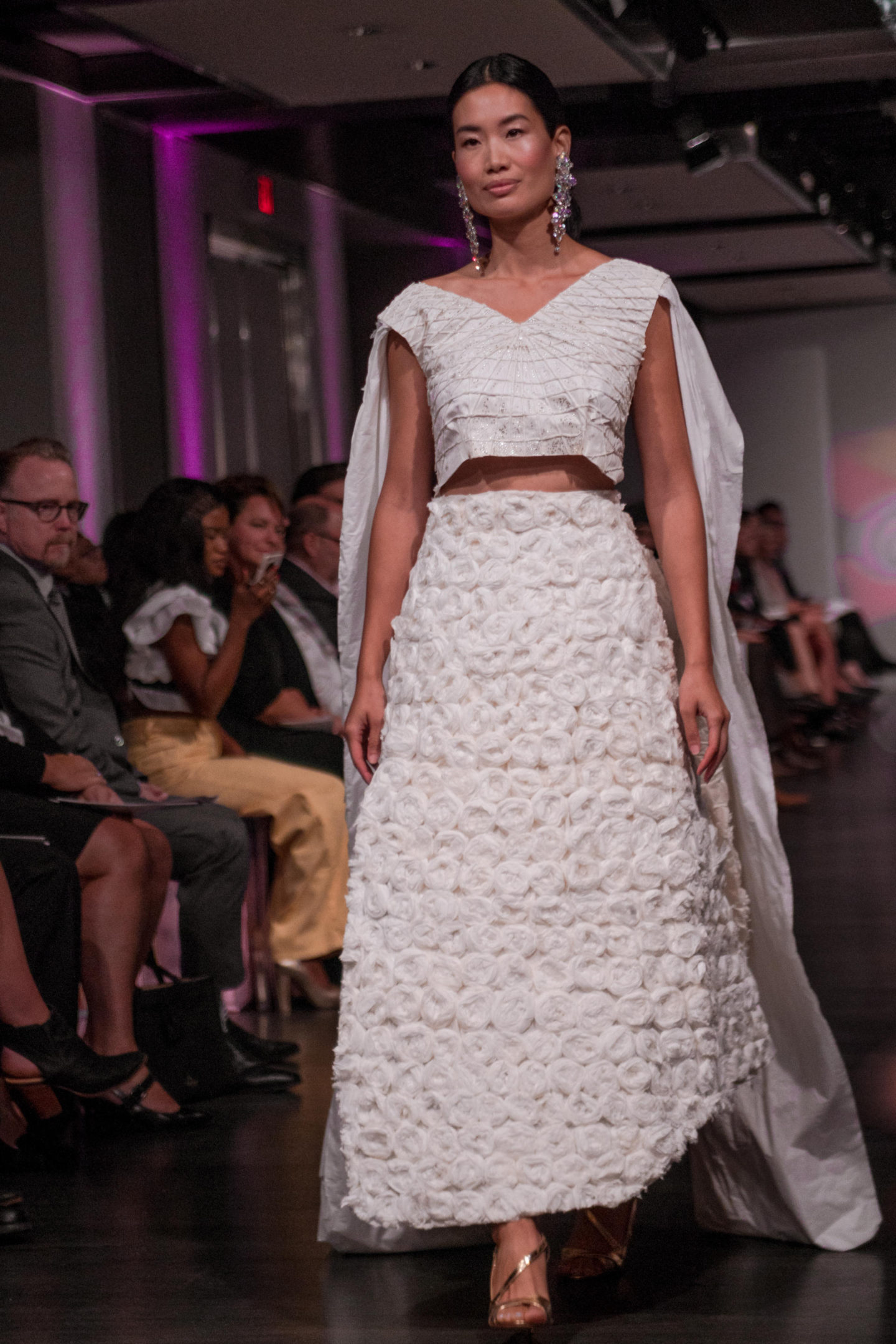 “Challenging, and I like that,” says Auneya Munir about adding Cashmere bathroom tissue to her usual design vocabulary of liquid metal silks, rich-colored chiffons and shimmery satins ornamented with lace, crystals, jewels and embroidery. No doubt, the largely self-taught, Toronto-based talent behind Neya Couture brings a signature southeast Asia mystique to her elegant gowns. 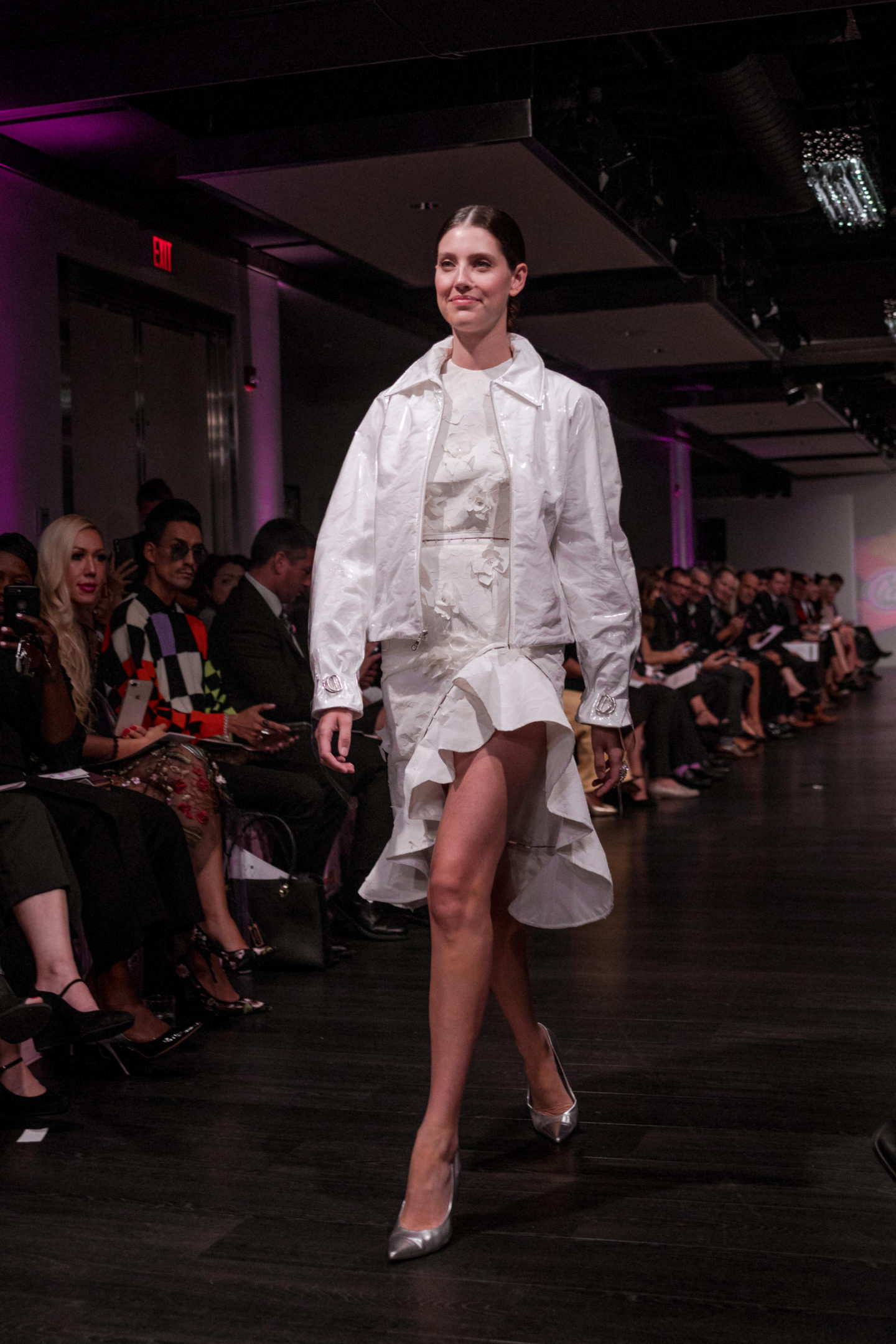 Style with a cool, contemporary ease that’s executed via expert tailoring and refined fabrics is the essence of Andrew Coimbra’s namesake brand, launched in 2015. This Toronto-based designer’s impressive résumé includes studies at OCAD and George Brown as well as an internship at Proenza Schouler in NYC and work with Canada’s Pink Tartan and Phillip Sparks labels. 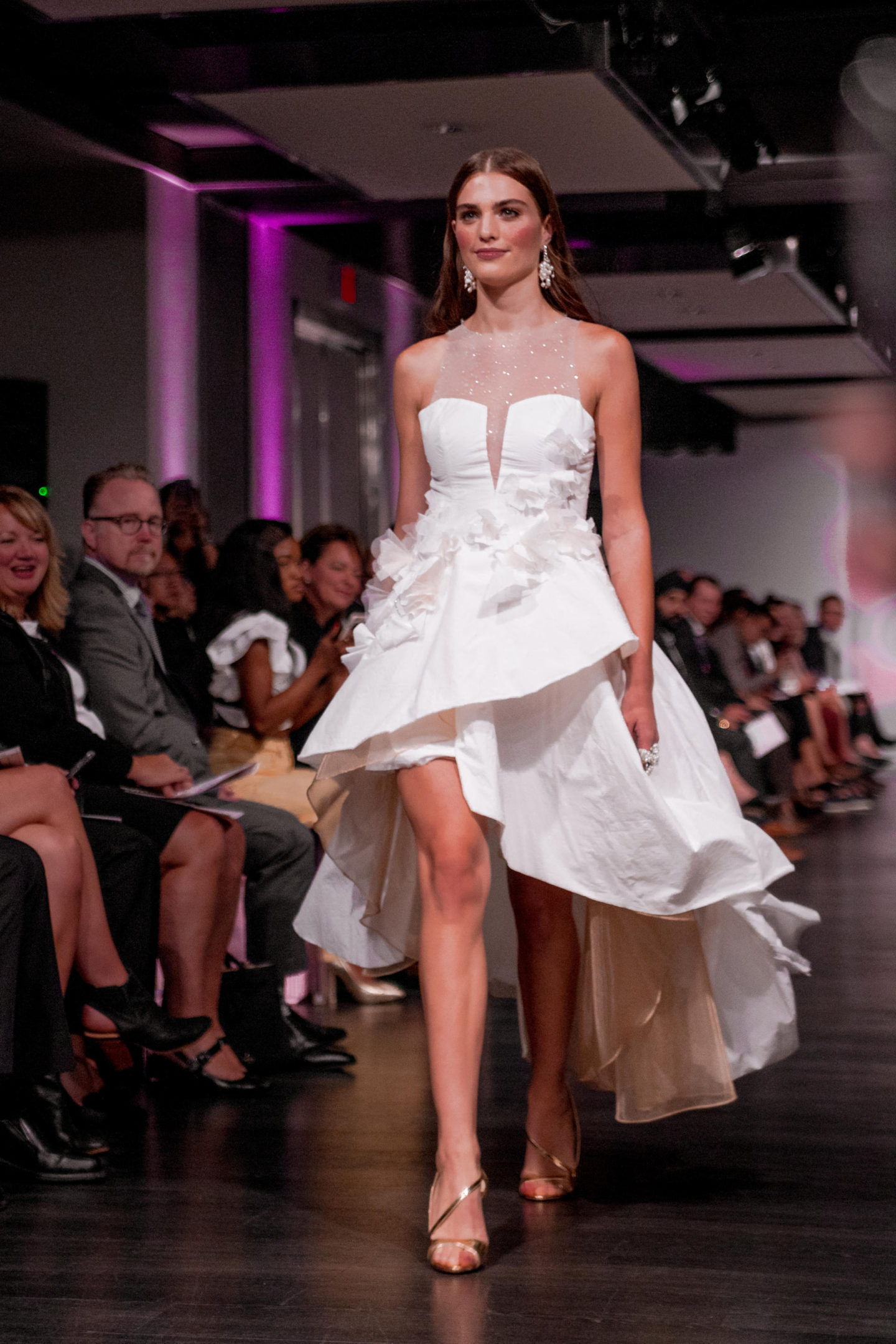 Having learned how to hand stitch at the tender age of eight, Antoinette Di Carlo was destined for a successful fashion career in one-of-a-kind bridal and eveningwear. Study at the International Academy of Design, travel to Europe to scope emerging trends and inspiration, and a keen eye for perfection and attention to detail preceded this Montreal native’s launch of Di Carlo Couture. Her timeliness silhouettes and elegant gowns are in demand for media personalities and discerning brides-to-be alike. 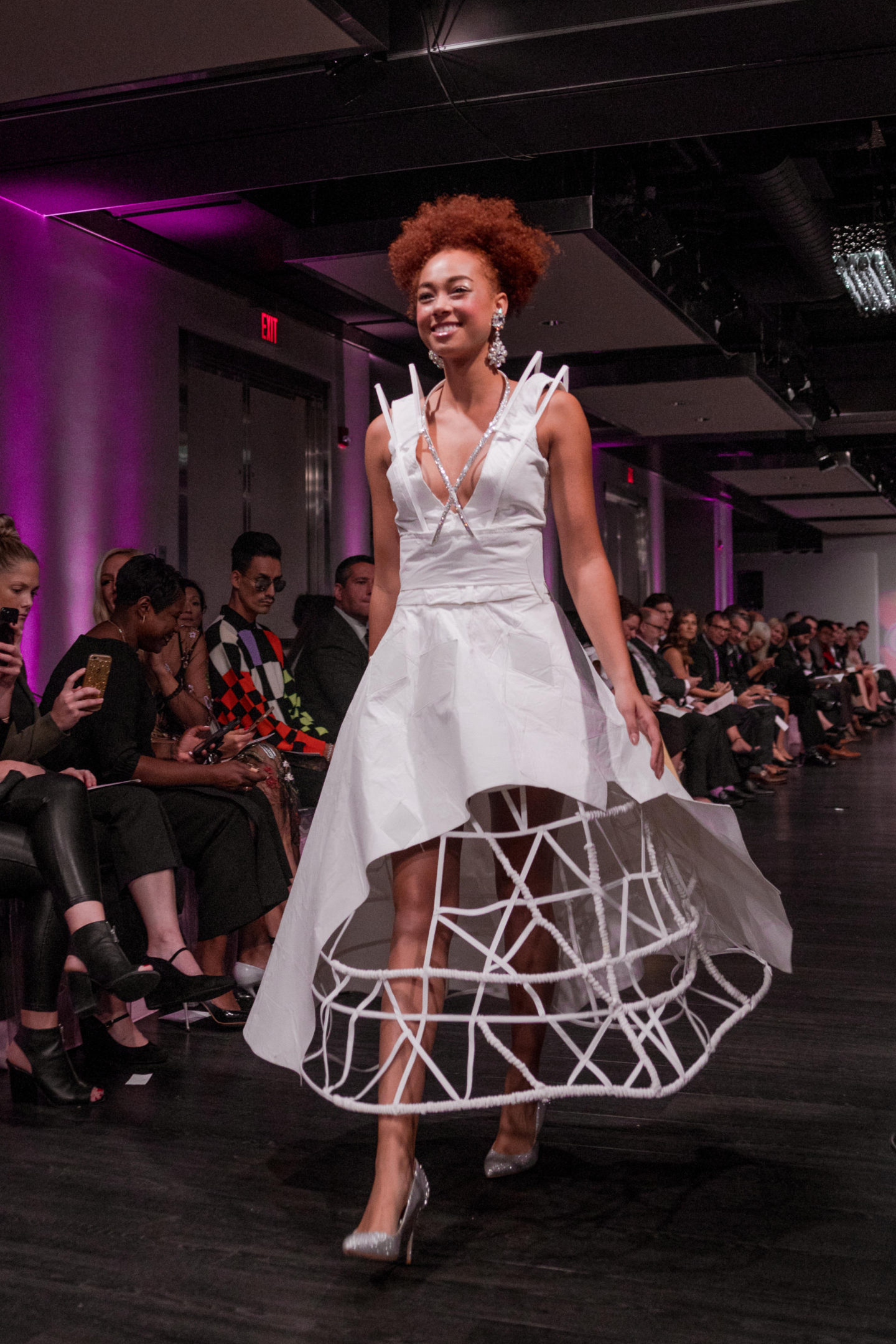 In two short years, Leila Zadeh has established the distinctive minimalist style that’s earned kudos for her House of Suri collection of contemporary women’s wear. Conceived and manufactured in Toronto, her pared-down, streamlined silhouettes—with surface interest provided via subtle pleats, panels, fringe and Suri accessories—impeccably achieve her stated goals of striving to challenge conventionality, and of creating clothes that give ultimate prominence to the wearer. 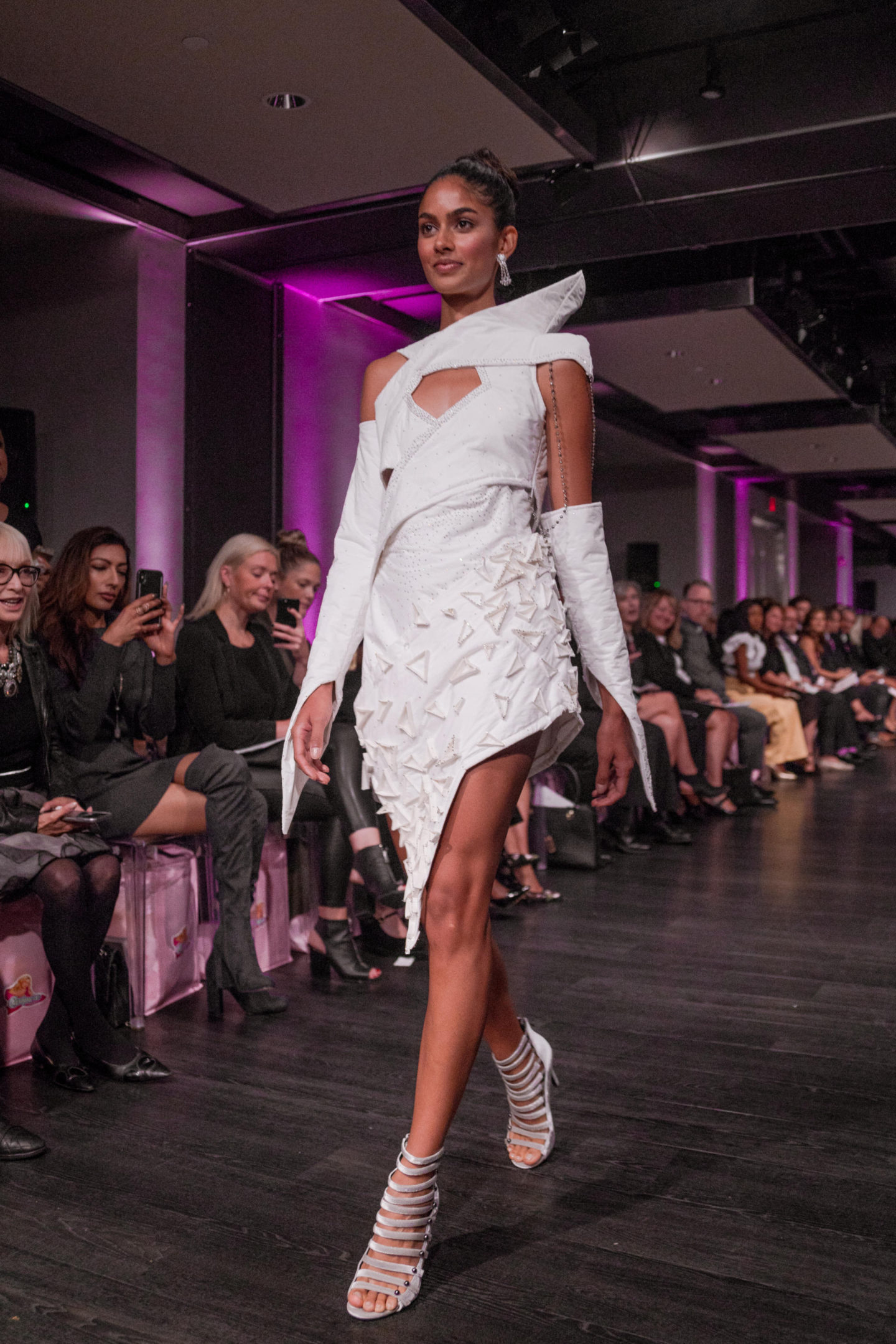 When designer Marita Mamuchashvili joined forces with artist Kakha Beri (both of Georgian, Europe heritage), a unique fashion collaboration was born. Since 2014, their Vancouver-based Fesvedy label has produced intricately layered and seamed women’s wear that is often exquisitely patterned in motifs inspired by various cultures, from First Nations traditions to Georgia’s temples and monasteries. 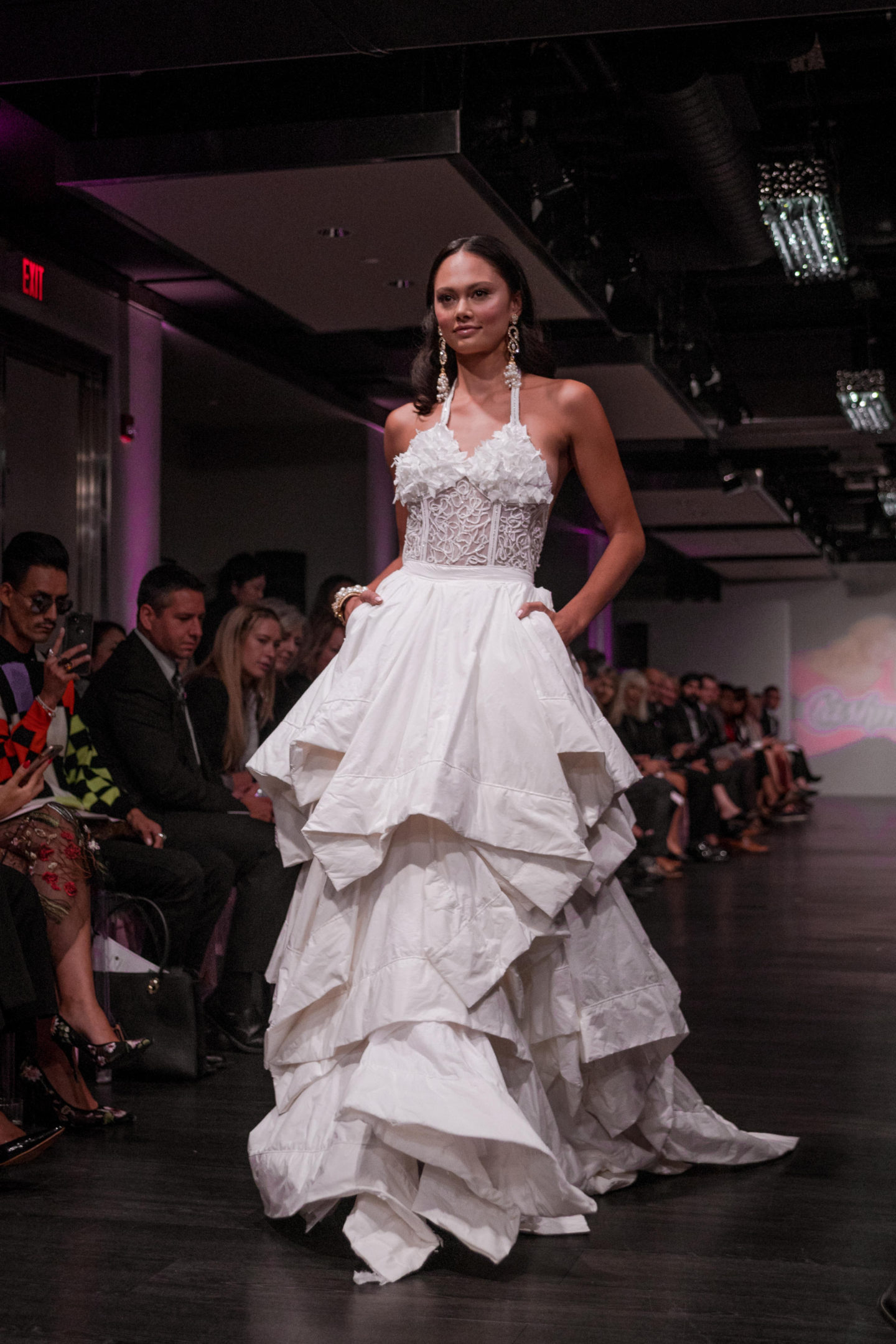 In 2014, Candace Daniela established her self-titled brand of tailored, contemporary outerwear with a commitment to using natural materials—wool, organic cottons, faux furs and vegan leathers. Her men’s and women’s coats and jackets have since been featured in VOGUE Italia, Dress to Kill and FLARE Magazine, just to name a few. 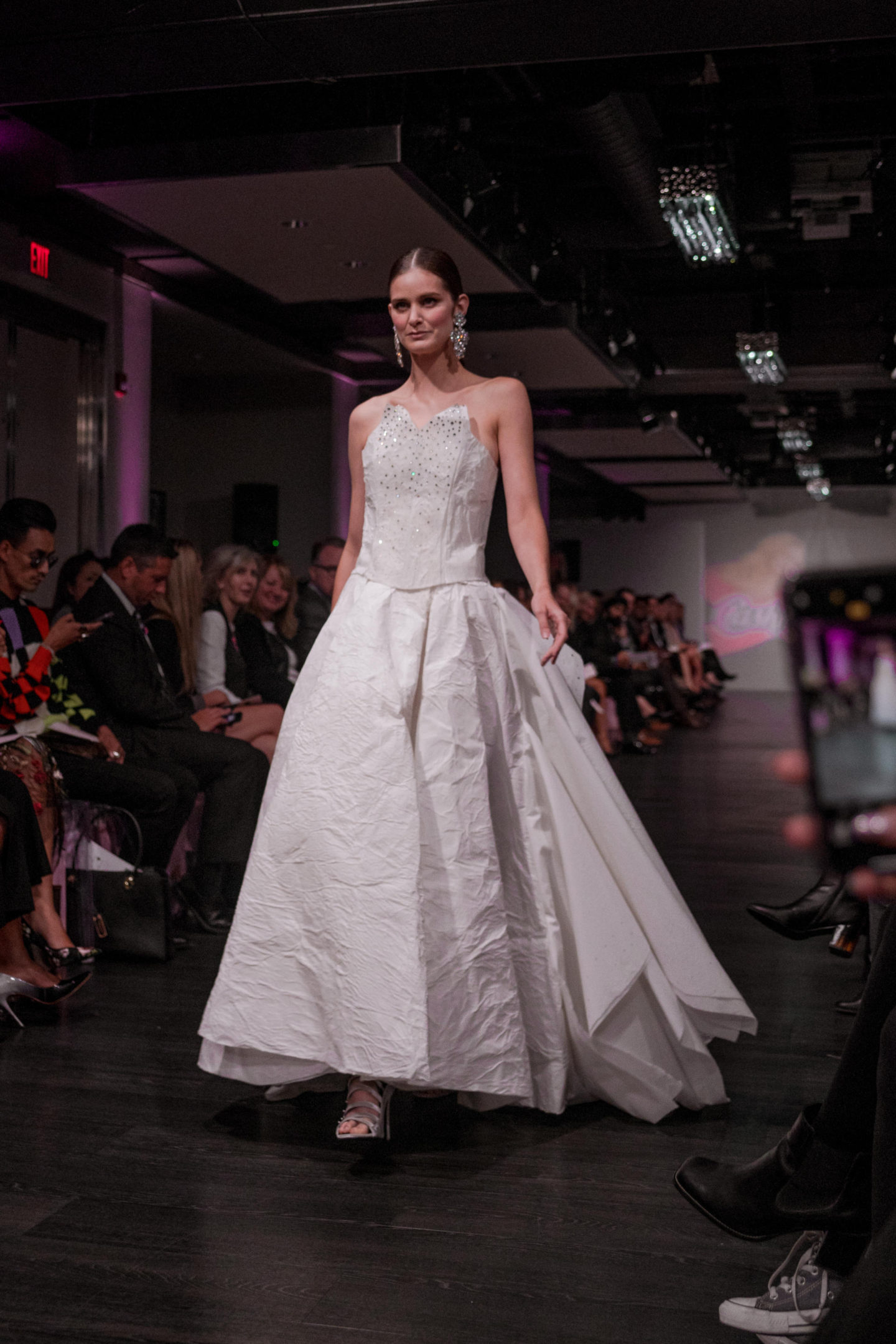 Lebanon-born, Toronto-based designer Maya Charbin’s early creative outlet was as a make-up artist for MAC Cosmetics. She then studied at ESMOD in Paris and Beirut to fulfill her childhood dream of becoming a fashion designer. Her namesake collection, launched in 2015, revolves around her “versatile silhouettes” concept, wherein flowing, feminine dresses, tops, pants and skirts can be folded, wrapped, tucked or re-configured depending on the wearer’s whim. 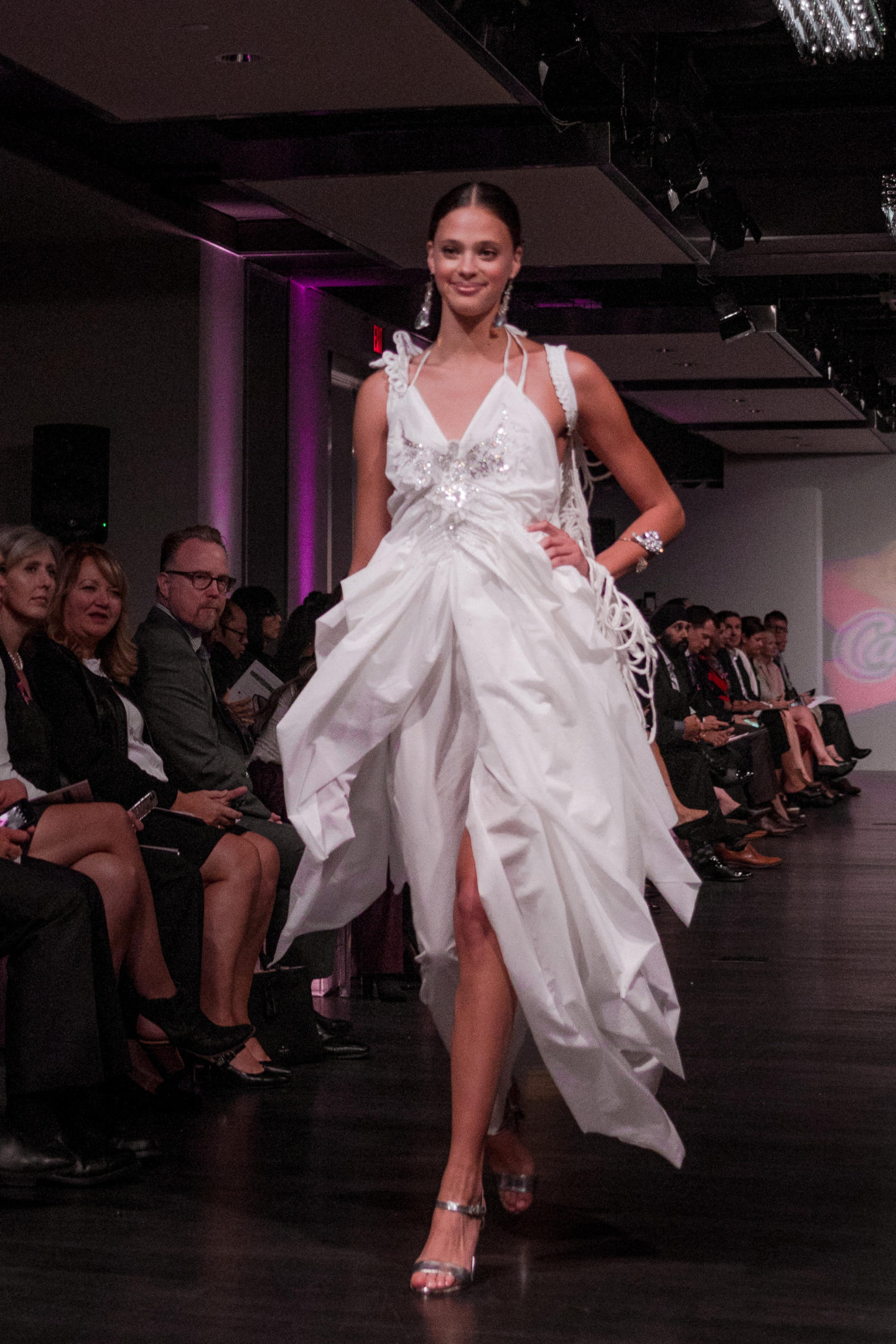 Claire Lemaître-Auger has taken a long and fascinatingly winding road -patternmaking studies at LaSalle, marriage to singer Mario Pelchat, a stint with Denis Gagnon, running a vineyard—to her 2017 return to fashion. This Montrealer’s women’s wear employs unique combinations of rustic and luxury fabrics and design idioms to express her conviction: “Every woman is a heroine (and needs a Hero) in her own story”. 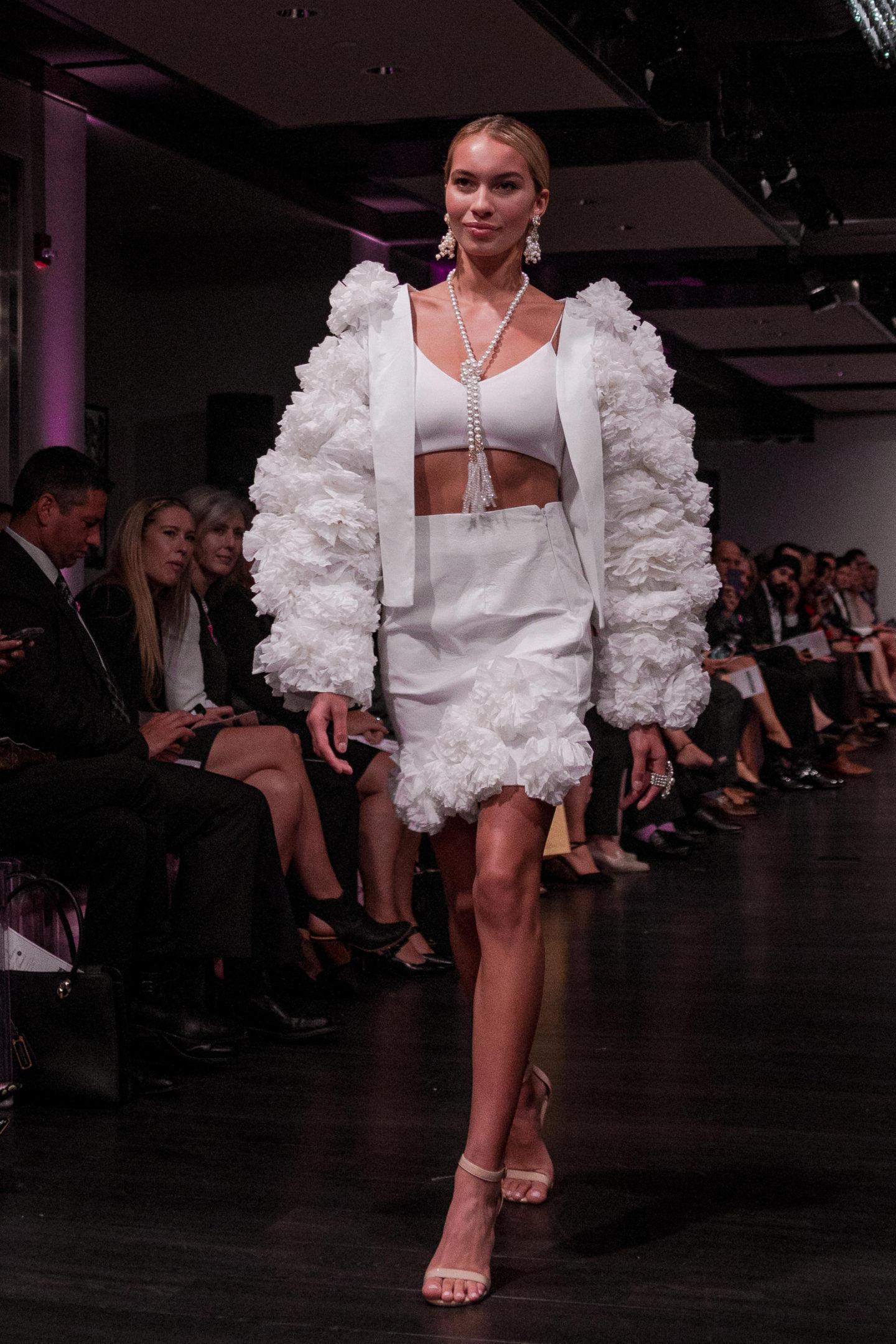 Since 2015, when Sebastian Guarin launched Atelier Guarin in Toronto, this Colombian-born talent has been attracting attention for his bold ready-to-wear creations from publications such as Vogue Italia and FLARE. The Atelier woman is strong, has an excellent sense of style, and is driven to find standout pieces. 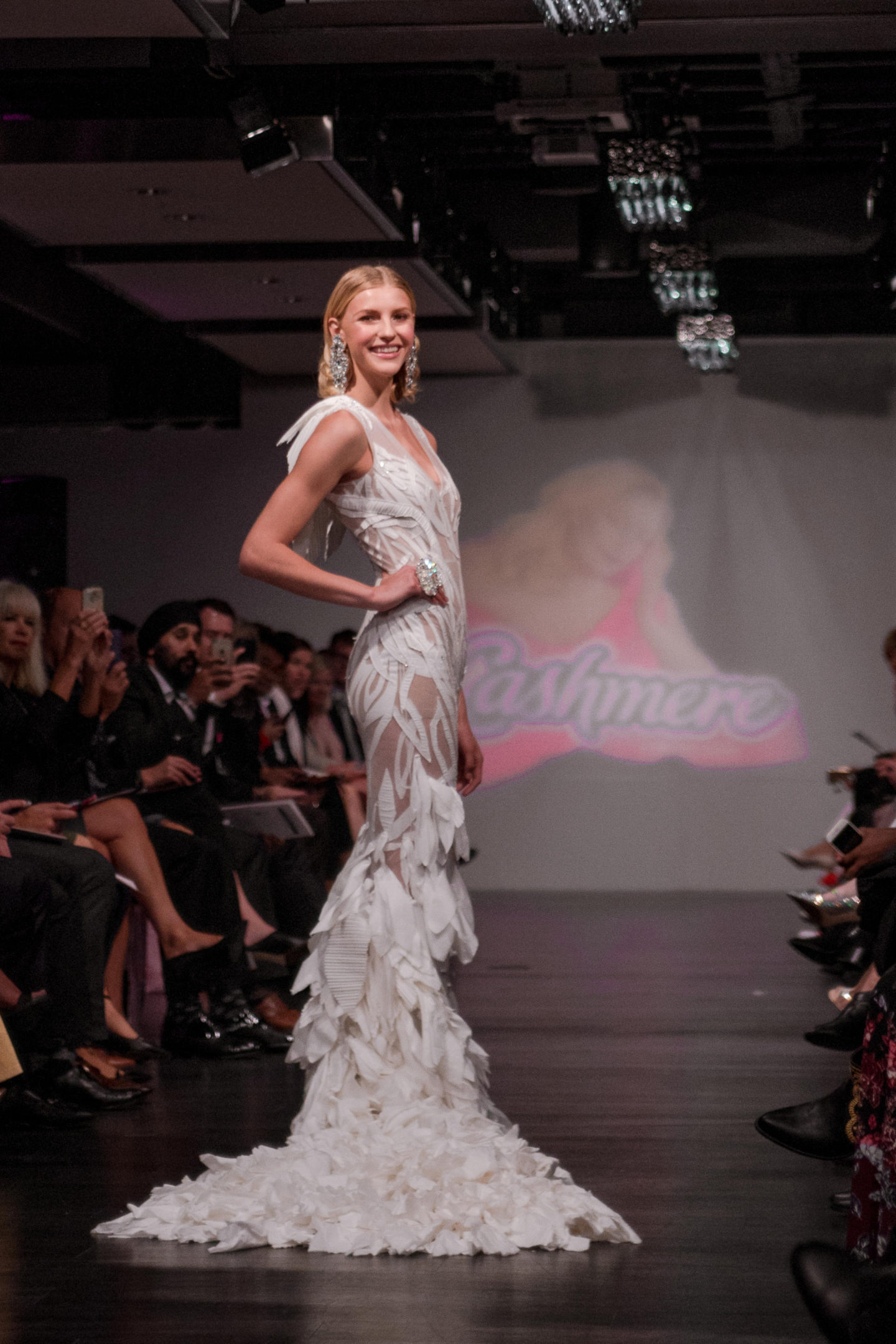 Couture glamour is the hallmark of Mississauga native Michael Zoffranieri’s bridal and eveningwear designs. With his recently launched ZOFF collection, this Ryerson grad and former David Dixon protégé, won the 2017 Toronto Fashion Incubator New Labels competition. As for his participation in the 2018 Cashmere Collection, he believes in supporting the women and men who are currently battling breast cancer. He would like to dedicate his creation to the people in his life that are his Crystal Figures: stronger than ever, and shine so brightly. 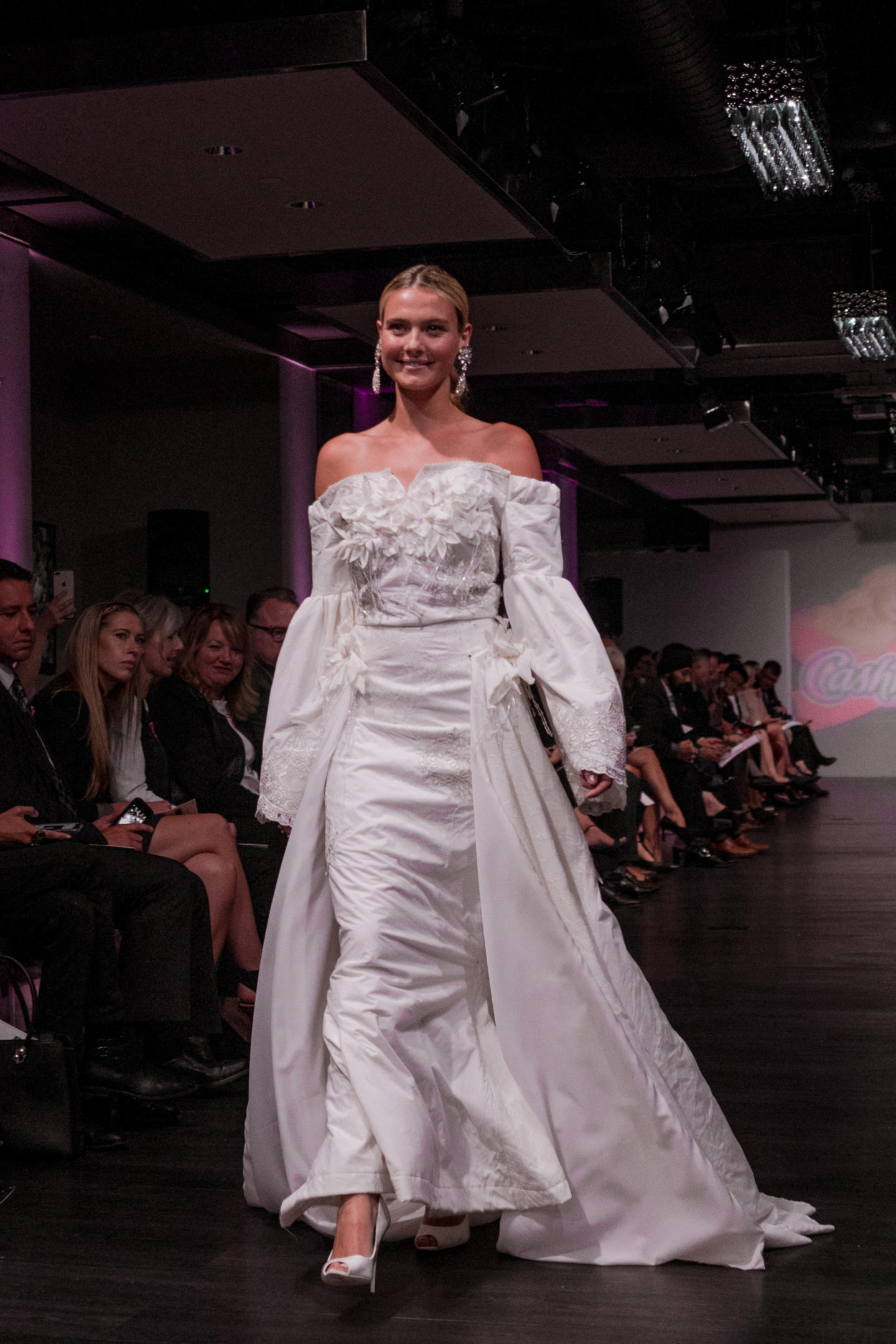 A Canadian-Mexican who arrived here in 2002, Oscar Mendoza augmented his visual arts and sound design background with patternmaking studies at Lasalle and an apprenticeship with Montreal designer Joseph Helmer before launching his eponymous couture collection in 2013. Carrie Underwood and Caroline Néron are among those he’s enticed with his luxurious, often sensually seamed, body-conscious silhouettes and fanciful lace, tassle or ruffle embellishments. 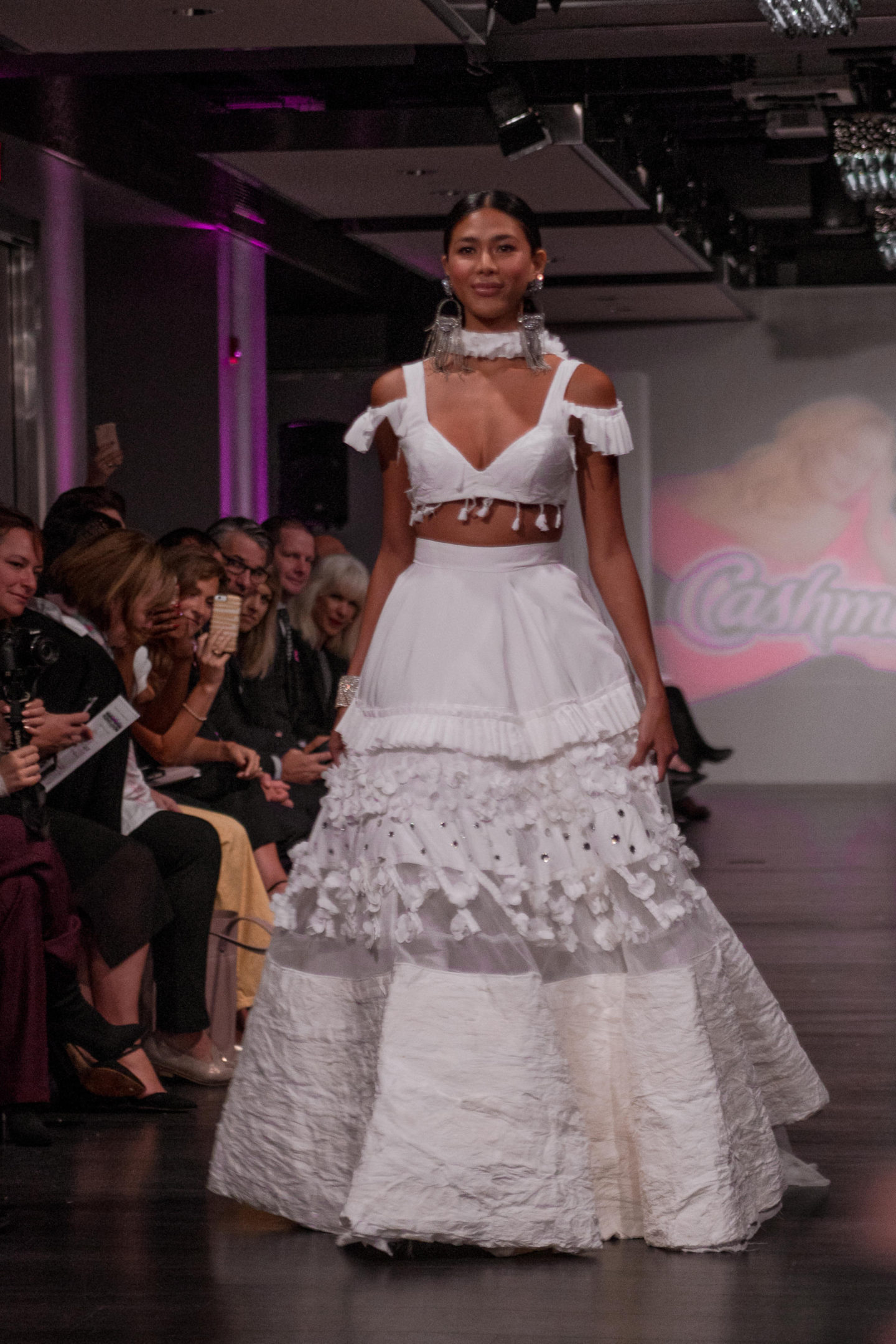 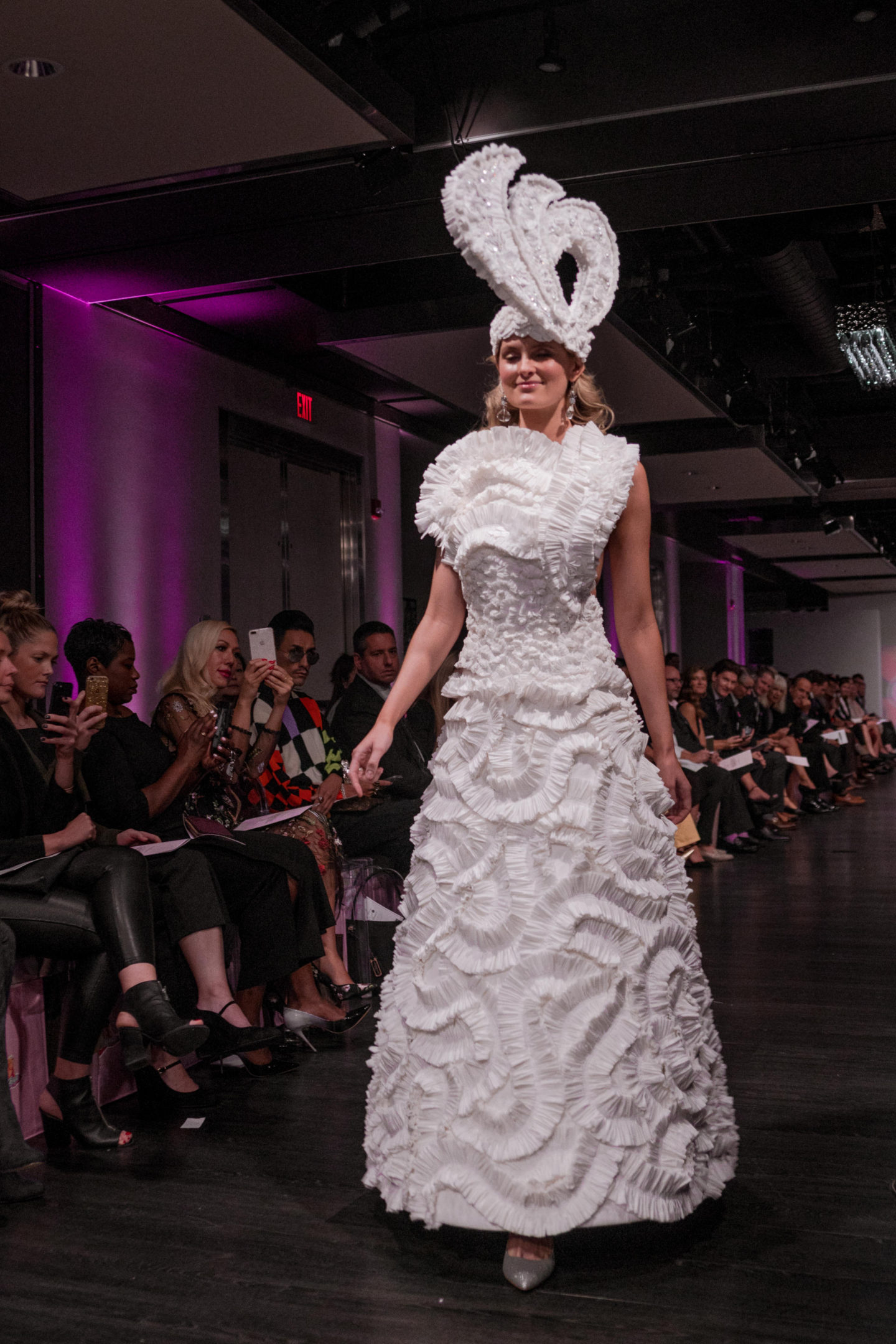 Czech-born Marie Copps is an accomplished fashion designer, accessory designer and milliner extraordinaire. Though Marie settled in Canada nearly 20 years ago, her elaborate neck pieces, dazzling jewelry and phenomenal fashions have made international appearances, having been featured in Las Vegas, Dallas, Singapore, Melbourne and Rome to name just a few.

After getting your fashion fix, don’t forget about your breast self-exam my lovely ladies! 🍒