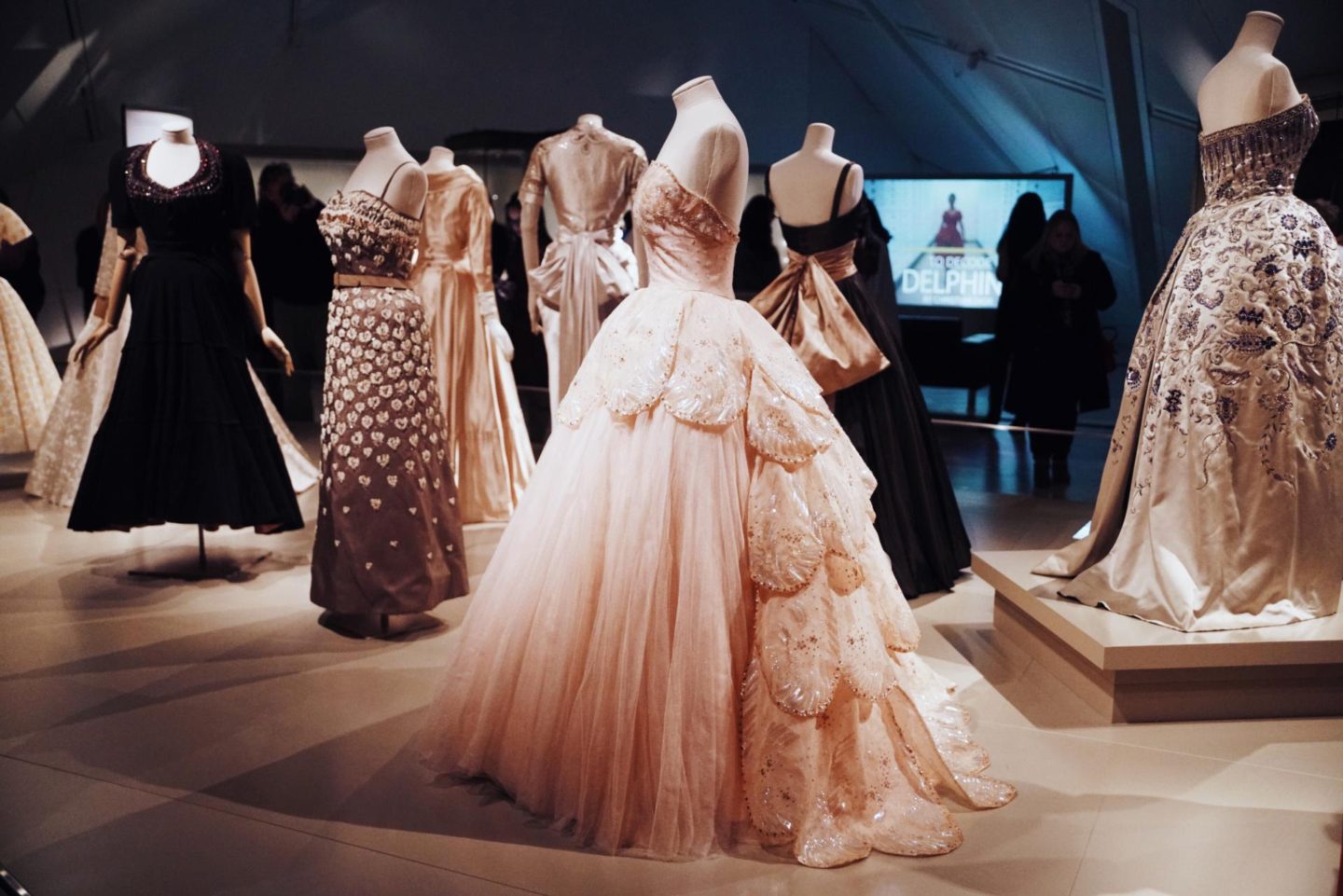 In celebration of the House of Dior’s 70th anniversary, the Royal Ontario Museum (ROM) presented Christian Dior, an original ROM exhibition focusing on the early years of Christian Dior haute couture, 1947 to 1957. This stunning retrospective, on display from November 25, 2017 to March 18, 2018, explores the brilliance that revived the Paris fashion industry following the Second World War. Presented by Holt Renfrew, the exhibition drew from permanent collection of Textiles and Fashions and is augmented with loans of accessories. Christian Dior features more than 100 objects, including 38 designs from daytime and evening wear to grand occasions.

Alexandra Palmer, who is the exhibition’s curator and ROM’s Nora E. Vaughan Senior Curator, said that Christian Dior’s revolutionary fashions captured the excitement of post war modernity and have stood the test of time. “This was made possible with the work of numerous industries and artisans who produced extraordinary ribbons, beads, sequins, and embroideries that Dior incorporated into his dresses with the assistance of his imaginative pattern makers, tailors, and seamstresses. These contributions resulted in striking, elegant, and poised fashions for all women, and for all times of day and night,” she added.

The exhibition examines the construction of garments, and why their cut and design made the New Look so successful.

Born in 1905 in Granville, France, Christian Dior began his career in Paris as a freelance designer and sketch artist, selling fashion illustrations to magazines in 1935. His first job in an haute couture house was in 1938 when Robert Piguet hired him as modéliste. 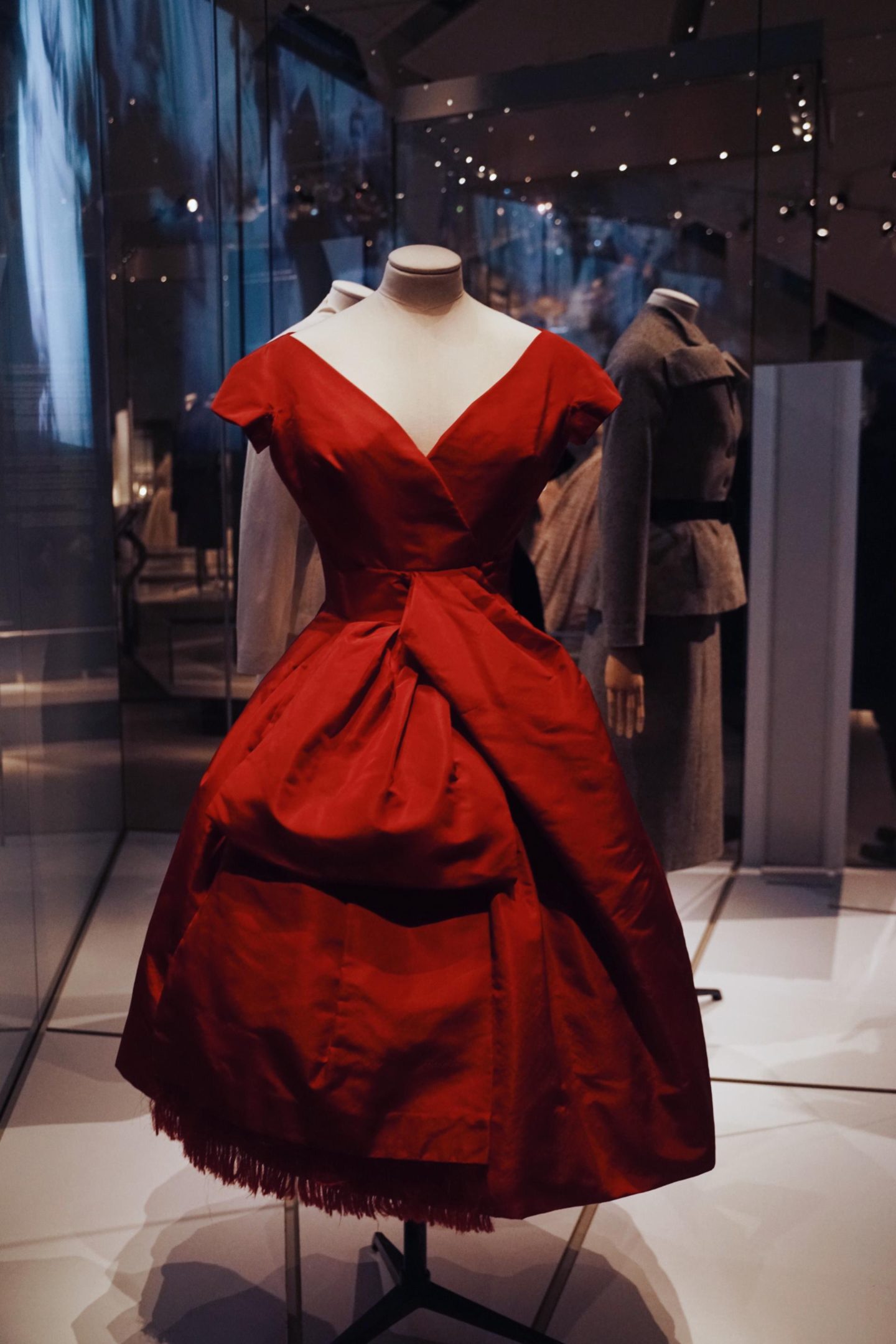 On Feb. 12, 1947, Christian Dior presented his first collection that became known as the New Look. The soft shoulders, cinched waist, accentuated hips and long, full skirts of Christian Dior’s masterful cuts swept away the wartime masculine silhouette and launched a fashion revolution that influenced women’s fashion throughout the 1950s. 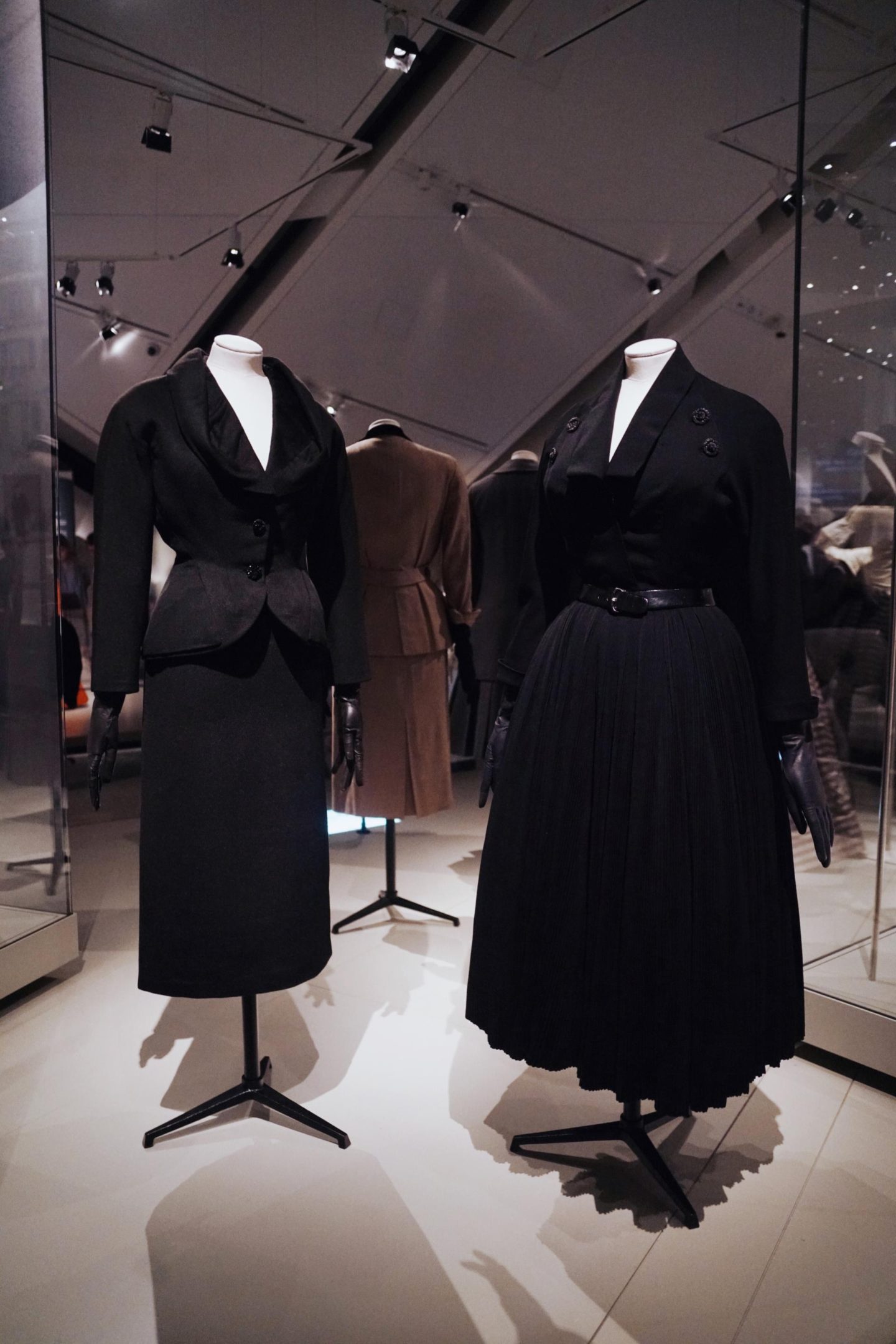 Christian Dior’s daytime suits and dresses were deigned for women on the move. Prioritizing precision tailoring over draping, he made sure the Dior woman looked sleek and feminine, and was not hindered by her clothing.

Fitted sleeves with soft, rounded shoulders were achieved by cutting the sleeve and body in one piece. Triangular bias gussets, inserted in the armpit, allowed for close fit and movement. 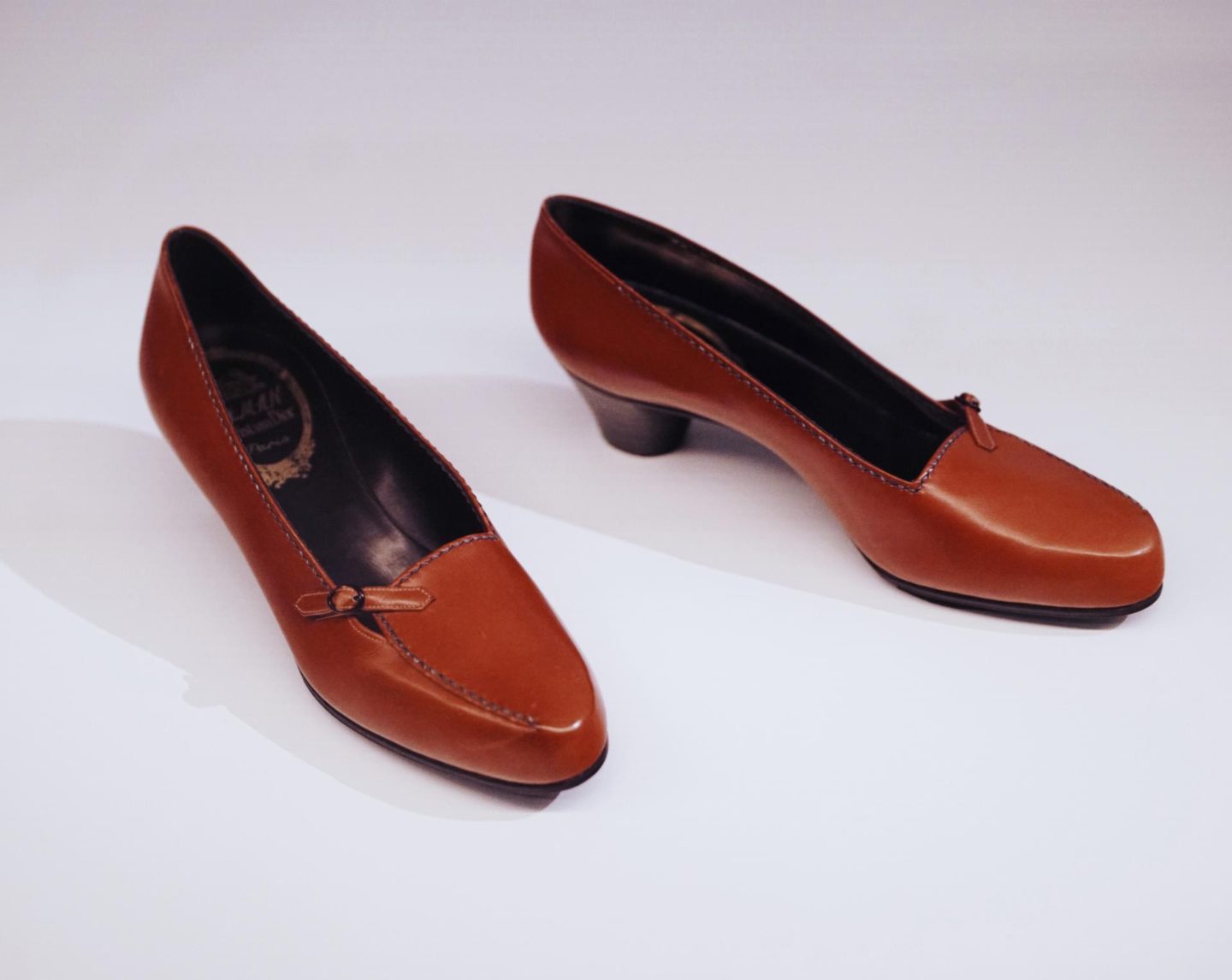 These morning shoes have a new rounded heel. Christian Dior favoured practical low heels for morning and taller ones as the day progressed and became more formal.

Christian Dior’s late day dresses were masterpieces of femininity and ingenuity that fused history and modernity. He introduced the cocktail dress in various lengths, and borrowed ideas from modular sportswear, suggesting an overskirt could also be worn as a cape.

Dior’s silhouette was based on a corseted, concave torso. It raised the bust, flattened the stomach and accentuated the waist and hips. It fastened tightly with hooks and eyes, making impossible to dress alone.

Throughout the 1950s, the press and public focused on the minutiae of Christian Dior’s fluctuating seasonal hemlines to be sure they would would never be out of fashion. 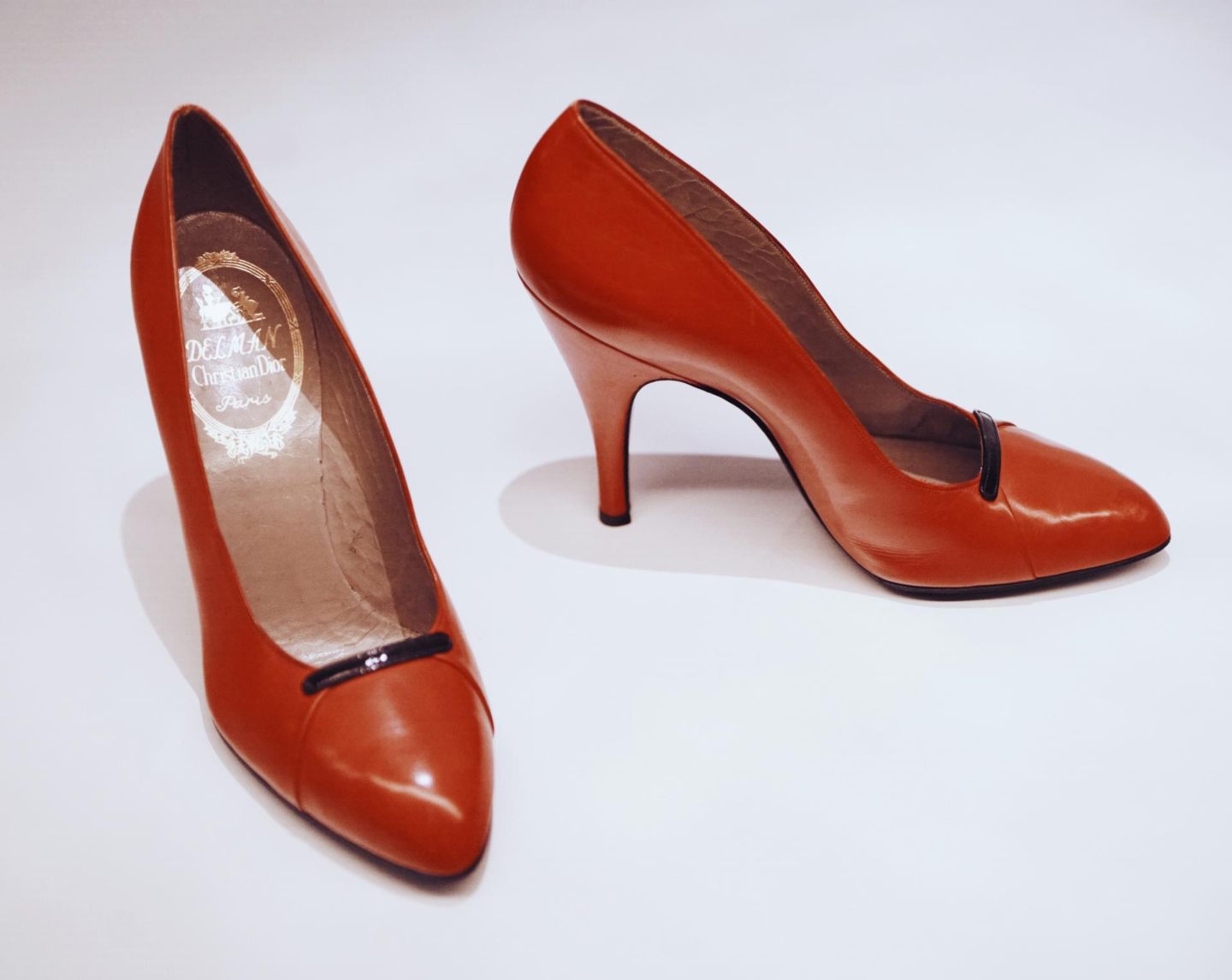 Christian Dior’s designs drew upon historical styles that reflected great moments in French design and society. He loved the 18th century, with its panniers (side hoops) and classical revival influences – the Second Empire (1852-1870), with off-the-shoulder dresses and wide crinolines; and the Belle Époque (1871-1914), with elongated, corseted torsos and daring décolletages. He drew form all, creating ravishingly elegant gowns.

The mid-19th-century invention of the steel crinoline eliminated the need for heavy layers of petticoats to achieve volume. Christian Dior’s crinoline petticoats were built into the dress. Five layers of cotton tulle were stiffened with crin (stiff nylon braid), to construct light-weight voluminous skirts. 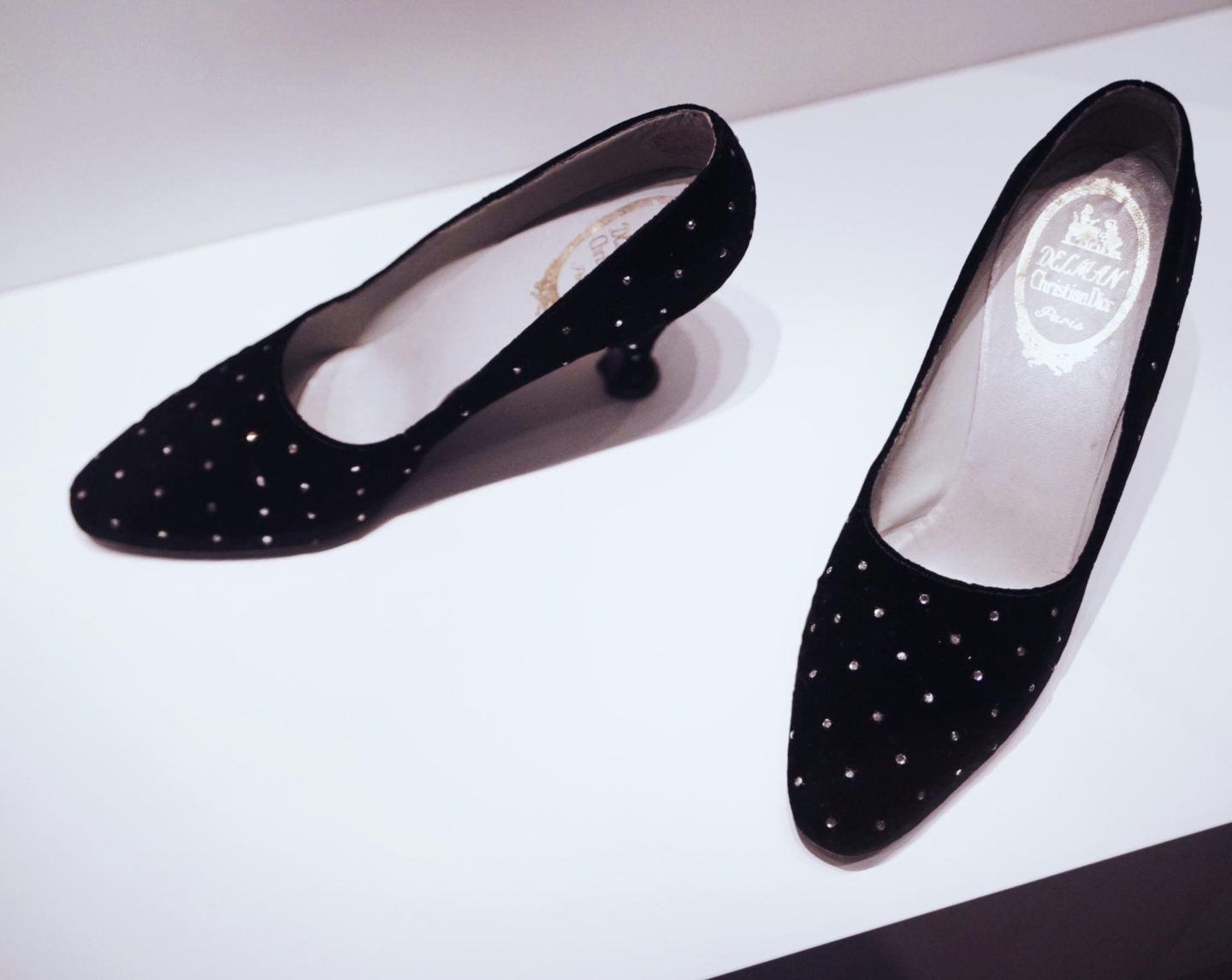 These evening slippers with Louis heel were called a “Dior-Delman [manufacturing deal] invention” by Vogue magazine. 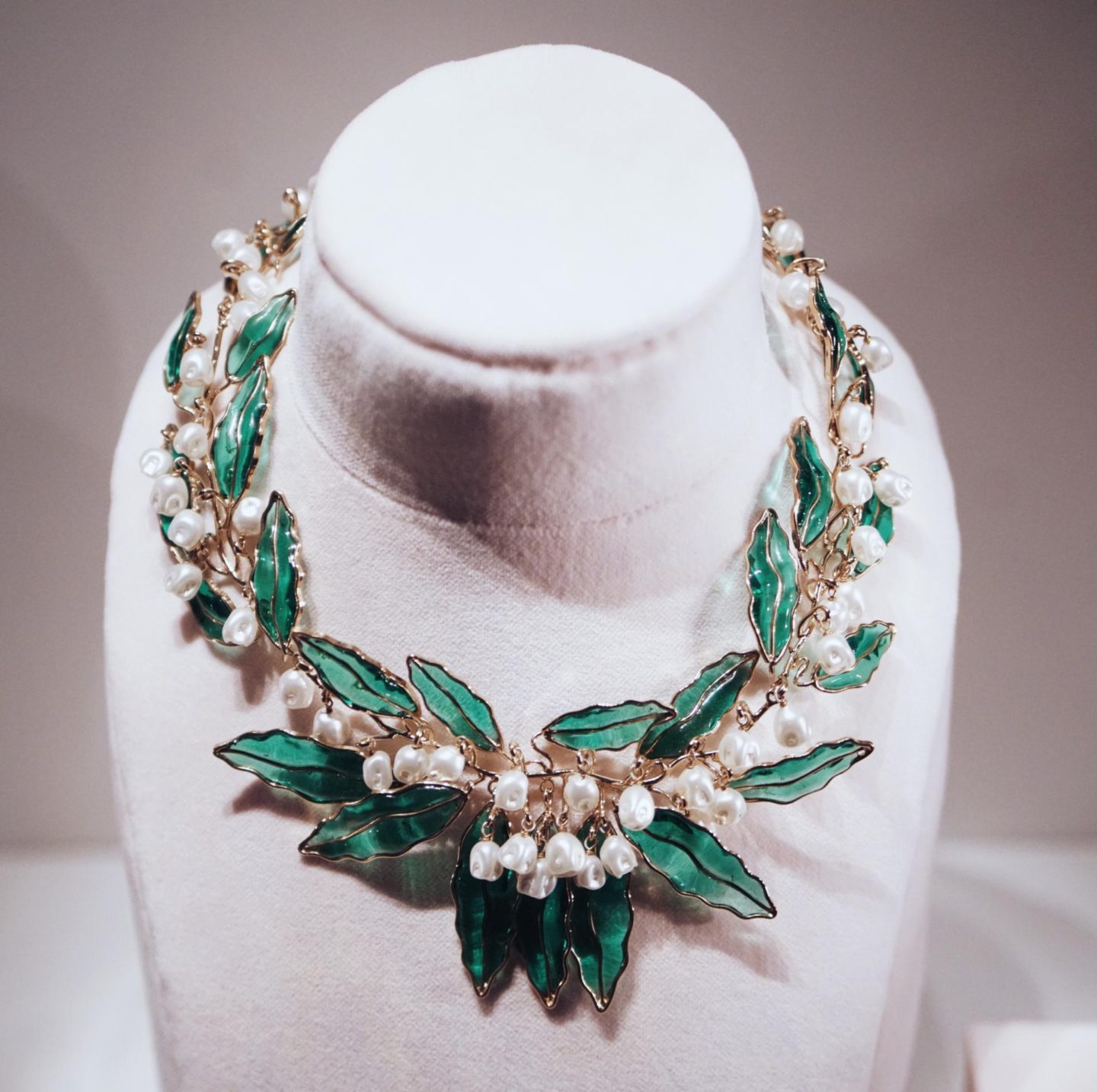 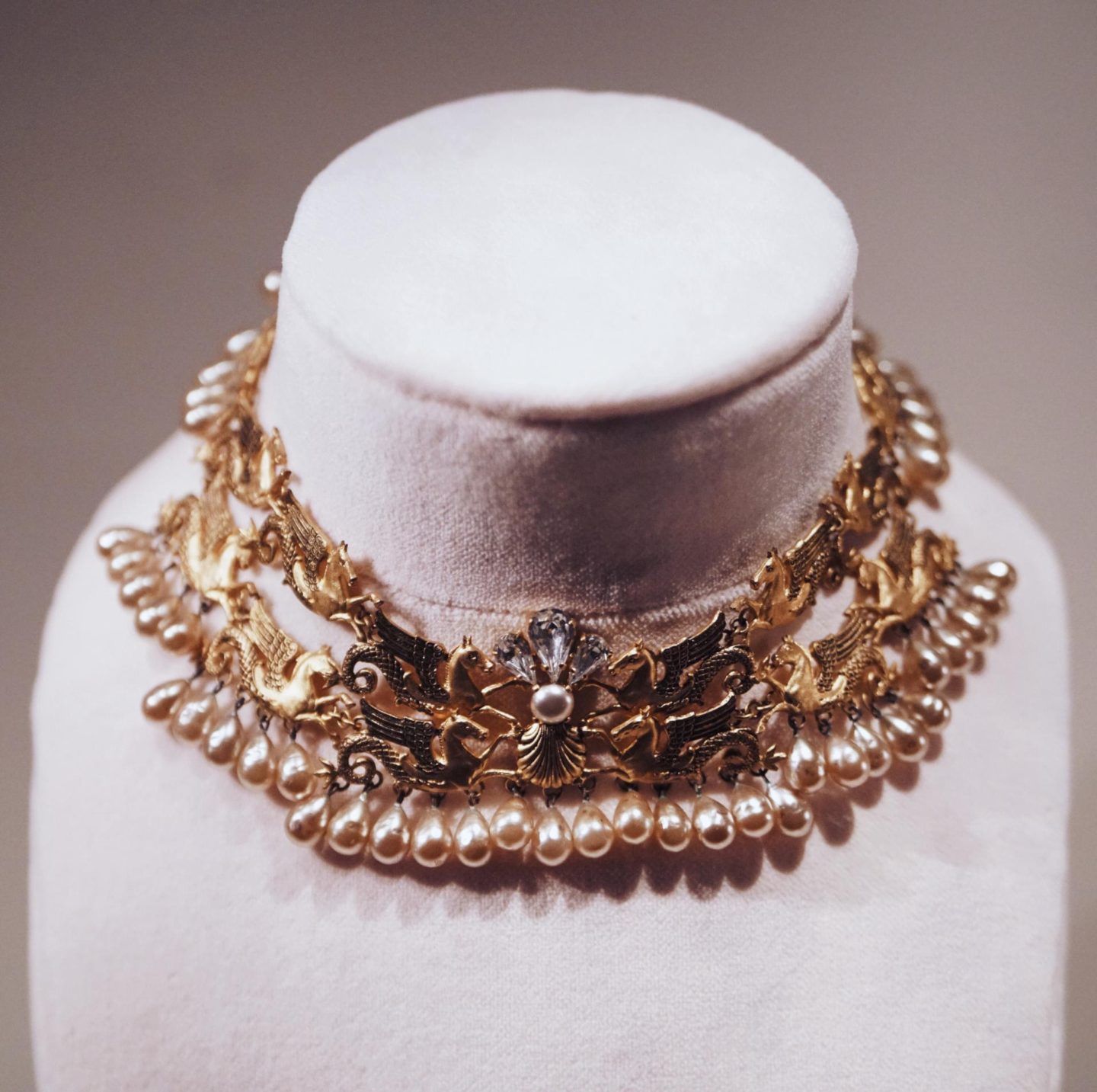 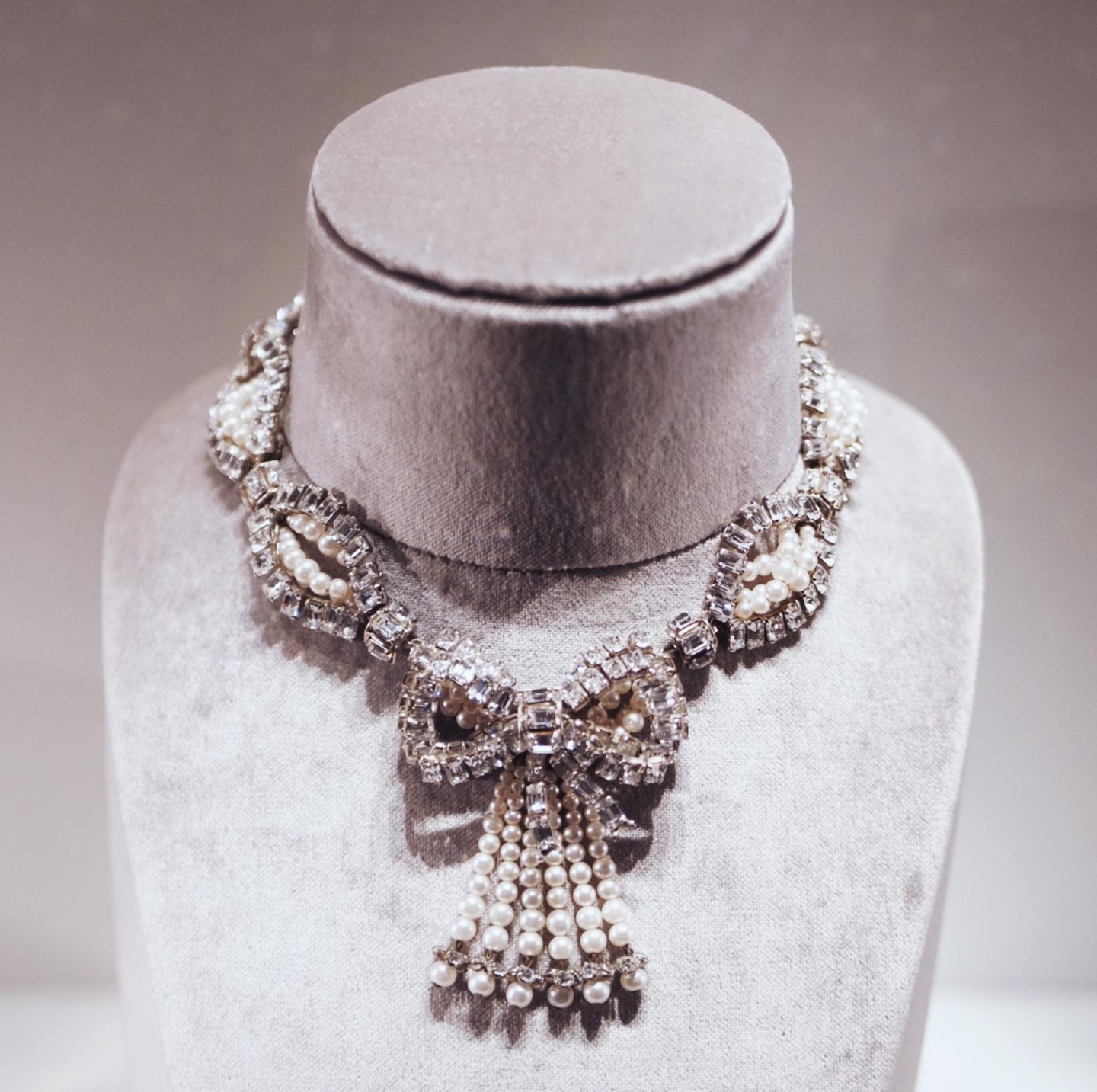 Costume jewellery, coordinated with the colours and fabrics of the seasonal collection, was an essential element to complete Dior look. The House commissioned exclusive designs from leading makers such as Maison Gripoix, Roger Scémama and Francis Winter.

During final fittings, Christian Dior would select the artful finishing touches from an enormous choice of fantastic individual elements and complex sets of necklaces, earrings, bracelets, and brooches. Glass, artificial pearls, and other inexpensive materials provided a range of colours and forms resulting in creative innovations with uncompromising quality of craftsmanship. The relative affordability of costume to fine jewellery allowed for a greater distribution of Christian Dior-approved designs.